Kristen Mapes Chosen for ALA Student-to-Staff 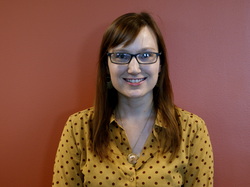 Congratulations to SCARLA vice president Kristen Mapes! The American Libraries Association chose her as one of 40 across the nation for the Student-to-Staff program. Kristen will receive free registration, housing and a per-diem for the annual ALA conference this coming June in Las Vegas for in exchange for working for four hours a day for the four days of the conference.

Kristen is in her second year of the MLIS program and plans to graduate in May 2014. By that time, she will also have completed an MA in Medieval Studies from Fordham University. She works as a Reference Assistant at the Library of Science and Medicine at Rutgers and finishing up an internship in Special Collections and Reference at Fordham’s Walsh Library. While working toward her MLIS, Kristen has enjoyed learning about and becoming involved in professional organizations, especially ACRL/NY and ALA’s New Member Roundtable. Kristen looks forward to entering a career in academic libraries with particular interests in digital humanities, special collections, and humanities reference.

Internship Activity: At the Reference Desk

I have to say fielding questions at the reference desk is probably one of my favorite things about librarianship. The questions at Montclair State University are usually academic and student driven (which I really enjoy), but the process of the reference interview is something that can cross over into many other areas of the profession. In addition, I like the face to face interaction, as much as the virtual interaction with the students and faculty. Overall I would have to say the concept of searching, helping and interacting is really a rewarding one.

Since we live in such fast paced culture, where people usually Google their questions away, I think it is all the more important that we, as reference librarians, know our stuff and know how to find it. So we need to know when and where to look for the answers to the questions posed to us. Although not every periodical and book is digitized, the fact that there are digital and analog choices, assists our efforts in getting people the information they need in an expedited manner. During my tenure at this MSU, as well as a student at Rutgers, I’ve created my own “go to list” of databases, websites and resources, so I could better assist patrons with their questions.

Here’s the thing about work the reference desk:  you never know what kind of question you will get! It’s actually exciting. I get to learn, dig and explore like an archeologist, except my job is a lot less messy. But that is what I enjoy most about the experience; the journey of discovery and in the end helping someone achieve their own academic goals. This is what makes working the reference desk in an academic setting so interesting; one day I could be helping a student find articles on a sociological subject and the next I’m helping them find resources on rare art from the Ming Dynasty. The possibilities are always shifting, which makes the experience all the more fulfilling and challenging.

Get Started in Scholarly Publishing: ALA NMRT Endnotes

Endnotes is a peer-reviewed, scholarly journal that addresses issues faced by new librarians. Articles should range from 2000 – 4000 words and present original research, practitioner-based research, and/or case studies. The Committee also welcomes poster presentations that have been developed into full-length article submissions.

Those interested in discussing an article idea are encouraged to contact the Editor at nmrtendnotesjournal@gmail.com to determine if the proposal fits the publication’s scope.

Article submissions are accepted throughout the year; however, articles received by December 1, 2013 will receive guaranteed consideration for the Spring 2014 issue.

Endnotes also offers book and media reviews relevant to new librarians. Reviews range from 300 – 500 words. Those interested in reviewing are encouraged to email the Editor at nmrtendnotesjournal@gmail.com to be included on the reviewers’ mailing list. Approved reviewers will receive periodic announcements of available books and websites.

CFP: Buffy to Batgirl: Women and Gender in Science Fiction, Fantasy, and Comics

May 2-3, 2014 Buffy to Batgirl is an interdisciplinary conference with a focus on women and gender in science fiction, fantasy, and comics. Science fiction and fantasy is a popular genre, as evidenced by the recent success of books, televisions, and films such as The Hunger Games, Game of Thrones, The Walking Dead, The Avengers, and Gravity. These books, television shows, and films include a wide variety of female characters, from protagonists to villains, warriors to “women in refrigerators,” and sidekicks to starship captains.

We invite submissions of individual papers or complete panels on any aspect of female representation in science fiction, fantasy, and comics. Due to the interdisciplinary nature of the conference, we seek to represent a range of critical and theoretical approaches as well as a variety of media.

Appropriate topics might include, but are not limited to, the following:

Buffy to Batgirl is open to all faculty, graduate students, and independent scholars. Undergraduate students may also submit proposals but should include the name of faculty mentor who will assist in the preparation of an appropriate conference presentation.

Rutgers-Camden, located just across the Delaware River from Philadelphia, is the southernmost campus of Rutgers, The State University of New Jersey. The campus can be reached from all major transit hubs in Philadelphia, PA, and is accessible by public transportation. Please contact the conference organizers for more information.

This internship at Penn is an amazing opportunity. I work there now as an Education Commons and RIS intern and they have a great program with a lot of support. I also did my M.A. in English with one of the librarians who works in this department. Definitely apply if you’re in the central/south Jersey or Philly area.

Hours: 20 hours/week including some weekend hours.

Our extensive training program leads us to ask for a commitment of one full year.

To apply, please submit a cover letter and resume to the attention of:
Elizabeth Martin
at martinev@pobox.upenn.edu
Please write “Courseware Support Internship” in the subject line.

Even if you have an internship at an academic library, you might still wonder what academic librarians do, especially in other areas of the library or in different disciplines.

The NJLA Job Shadowing Program is a unique externship-type program that pairs a student with an academic librarian for a day or so. During this time, the student will shadow the librarian and have an opportunity for information interviews.

You can view the list of people who have volunteered to be contacted by students for shadowing, or if you have any questions about the program you can contact Zara Wilkinson at zara.wilkinson@camden.rutgers.edu.

I’ve been juggling a few projects for my internship, but one that I’ve been really engaged in is revising and creating research guides. My exposure to LibGuides came about as a graduate student. To be honest this experience could be coined as “LibGuide 101: An Introduction.” The initiative is keeping in line with Web 2.0 for libraries (academic and public alike), so it will be a valuable commodity to learn. In addition, they have been a helpful “go-to” reference source when answering questions at the reference desk. I have been able to recommend several guides to assist students and alumni with their requests. My goal is to spread the good word about these virtual nuggets of information.

To build the research guides at Montclair State University we use LibGuides by Springshare, which is not only user friendly, but actually fun to create. To me it’s reminiscent of Tumblr, which I’ve used on a few school projects (Literary Chicanas is one of my latest examples), except the layout and the concept for organizing information is different. However, uploading pictures, videos and adding text is what makes these two platforms distant cousins. After getting acquainted with the application, organizing and arranging the content has been like piecing together a creative puzzle of information.

Thus far, I’ve revised an existing reference sources guide and am in the process of creating a new guide on visual literacy. This project has been challenging in terms of choosing what visuals to use, defining visual literacy as a discipline and how to concisely explain existing resources in a clear and efficient manner. One of the nice things I’ve been able to incorporate is some of my photography. This is not only a great way to visually communicate information with users, but it also lends itself to my creative side.  So for a creative soul, who thrives on sharing information it’s a win/win situation!

I’m inquisitive by nature; I imagine a lot of librarians have this innate quality since we are hunters of information. As a result, I’ve always had an interest in academic librarianship. Teaching as an adjunct at William Paterson University and observing a literacy class became the catalyst for my interest in academia. But I vividly remember saying to myself upon completion of the literacy lesson, “I would love to do this!” Plus I thought it was great way to translate my skills as a news researcher to that of the world of academia. So I made it my goal to learn all that I could by getting an internship at a university library.

This semester I’m interning at Montclair State University and the experience has been enlightening and energizing. I have several projects lined up for the semester:

The nice thing about this internship is that I am getting the opportunity to delve deeper into academic librarianship, more than I could in any class. I’ve always felt that “experience” is one of the greatest teachers and this internship is proving that sentiment true.

I have to say the “leap” to the reference desk seems very organic for me. Perhaps it’s due to my present job as a researcher at a news organization; the only difference is I communicate with producers instead of students (or professors) and search for video instead of books or articles.

I’ve just finishing up my first month at MSU and so far I’ve been exposed to more than I could have hoped for! Thus far, all has been challenging, but I’ve only dipped my toe in the pool of academic librarianship. Now I’m ready to dive in.

First Meeting of the Semester

We had a great first meeting of the semester, and we apologize to any online students who may have logged into Adobe Connect to join us virtually. We had a technical problem with the Adobe Connect kit, which we hope to resolve for the next meeting. You can read the complete minutes on our Meeting Minutes page.

If you have any questions about upcoming SCARLA activities, please contact Jen Hunter jah123@camden.rutgers.edu or Cassidy Charles at cassidycharles24@gmail.com.